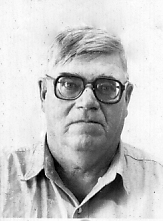 William John Clair Brown – Passed away peacefully at Souris Personal Care Home on Saturday, January 7, 2017 with his wife Teresita by his side. Clair was born February 9, 1926 the eldest child of Stanley Arthur Brown and Jessie Grace Brown (Waterman) in Souris, Manitoba. He grew up in Souris living with his grandmother, Mrs. W.H. Brown. He returned to the farm at age 13, a real culture shock! His father passed suddenly in October, 1945 at the age of 52 and the children and their mother were left to take care of the farm. Thus Clair became a farmer whether his choice or not. He and his brother Art farmed together until Art passed away in 1986.

In 1979 Clair traveled to the Philippines and he and Teresita Rubillos were married. He continued farming until 1992 when he rented out the farmland. He and Teresita continued to live on the farm. He always said that he would stay there until the end of his life time. He almost did just that.

He was a very well read man and interested in all politics. He was very clever and learned quickly so could discus many subjects very intelligently. He possessed a very strong memory.

The funeral was held at St Mary’s Catholic Church Souris, Manitoba with Father Kelly Wilson as celebrant. The eulogy was given by Clair’s niece, Debra Kain.

In memory of Clair, donations may be made to the Souris Personal Care Home c/o Prairie Mountain Health Box 10 Souris, Manitoba R0K 2C0.