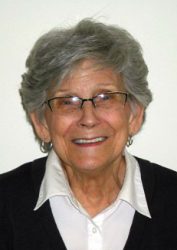 DRUWE – It is with loving thoughts and heavy hearts we announce the sudden passing of Marie Druwe at her residence at Victoria Landing in Brandon, Manitoba on April 22, 2013. Marie Christine Eliza Druwe was born to Laure Marcq and Joseph Bertholet on July 5, 1928 in Grande Clairiere, Manitoba, the tenth of twelve children. She got her education there and at a young age of seventeen married Charles Druwe. Together they worked the family farm and raised their four children. Marie and Charlie were a team. They spent endless hours together in the hay field and milking cows. Marie loved cooking, gardening and knitting. Visitors to their home were always treated with homemade bread/buns, cinnamon buns and matrimonial cake, and as for her knitting, many of her family members may be seen wearing the mitts and socks she so lovingly knit. As the years passed, they increased their herd of cattle and got into dairy farming. They were committed to the morning and night milkings for many years until their retirement to Hartney and then to Brandon in 1980. There, they decided to enter the craft sale scene and there was soon a beaten trail to many rural towns where Marie and Charlie made their mark with their Christmas cakes, wooden crafts and knitted items. They later moved to Victoria Landing where Marie excelled at friendship, a trait which came easily to her. The two of them continued to enjoy visits from their family, playing cards and playing with their dog Belle. Marie’s greatest joy though was her children, grand and great-grandchildren who spent many hours in her loving arms being rocked to various French songs. She will be lovingly remembered and greatly missed by all who knew her. She was a great example of being beautiful inside and out. Marie was greatly saddened by the recent passing of her oldest daughter Sharon Fry of Calgary, Alberta. She is survived by her devoted husband of 67 years, Charles Druwe of Dinsdale Personal Care Home; daughter Claudette McPherson (Ian) of Panoka, Aberta; grandson Lee Reynolds (Kendra), great-granddaughter Layne, grandson Trevor Reynolds, great-granddaughters Rachel and Olivia; son Cyril Druwe (Kathy) of Hartney, Manitoba, grandson Joe Druwe (Whitney), granddaughter Ang (Tyler) Henderson, great-granddaughters Jaydee and Marlee, grandson Finn Druwe (Carly); daughter Connie Morrison (Darwin) of Kelowna, BC, granddaughter Jaycee Small (Joel), great-granddaughter Surie, granddaughter Channing Morrison, grandson Dru Morrison; grandson Rick Fry and great-grandson Reid. Marie is also survived by sisters Rita Denbow of Souris, Manitoba, Anne-Marie Bauche of Brandon, Manitoba and three sisters-in-law Edith Bertholet, Lena Bertholet and Marie Bertholet, as well as many nieces, nephews and extended families. A memorial service was held at Kowalchuk’s Funeral Home in Souris, MB on April 27, 2013. Cremation has taken place and a family service will be held at a later date for interment. Our family would like to express our heartfelt thanks to Dexter at Kowalchuk’s Funeral Home and the staff at Victoria Landing and the Grande Clairiere choir. Thanks to Rita Denbow and family for hosting lunch and a time of fellowship following the memorial service in Souris. Thanks also to the many friends and relatives for your sincerity through meals and baking, cards and flowers, phone calls, visits and hugs and many other acts of kindness.
And in Mom’s words…..LOVE YOU, LOVE YOU.