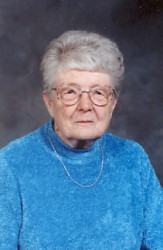 Harkness, Thelma Irene (nee Mote), passed away peacefully on Thursday, April 25, 2013 at the Souris Personal Care Home. At 16 months of age she came to Manitoba with her family and lived her entire life in the Souris area. She married Bob Harkness January 12, 1938 and together they raised 2 children. Thelma and Bob worked together on farms in the Lily and Huntingdon districts. They moved into Souris in 1956 and operated their dairy farm across the creek as well as continuing to work their farm in the Huntingdon area until they retired in 1977. Over the years they travelled to the Maritimes, Shuswap, Yellowknife and Disneyland. During the 7 years after retirement they enjoyed bus trips to Alaska and Nashville. They loved to dance and play cards with friends and family. Bob passed away in 1984 and 2 years later Thelma moved into Crescent Manor and lived there 24 years. She spent the next 2 years in Victoria Park Lodge and was only in the Personal Care Home for 2 months. Thelma was affectionately known as “Granny” by her family and many friends.

Thelma spent a lot of time involved in her community. She was a member of Huntingdon Ladies Association, Souris U.C.W. and Rebekah Lodge. For many years she delivered books from the library to the Personal Care Home on a bi-weekly basis. The bulletins at the United Church were folded by her for several years, right until November 2012. Granny was a leader in the 4-H sewing club and did a lot of knitting, needle point, sewing and puzzles. She faithfully attended Church, and activities at the Fellowship Club and Legion. Family gatherings were always an important part of her life.

A funeral service was held at St. Paul’s United Church on Friday, May 3, 2013 with Reverend Harvey Hurren officiating. Interment was in Rosewood Memorial Gardens Cemetery. Urn bearers were Jared Minary and Ashly Gilchrist. In memory of Thelma, donations may be made to the Heart & Stroke Foundation or to a charity of your choice.