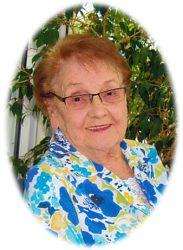 Green: Marion Irene passed away peacefully with her family by her side on October 15, 2015. Marion was born October 27, 1933 in Souris, Manitoba, the eldest of 4 children to Frank and Evelyn Kufflick. She attended the Hillsdale School and finished her education at Griswold, Manitoba. Marion was an avid ball player and catcher was her position. She curled for many years, and in later years enjoyed watching the “curling” on TV with her son Wayne. Marion married Jack Green on January 31, 1953 in Fort William, Ontario. They returned to the farm north of Souris in 1955 and it was there they raised three boys Wayne, Brian and Donald. Marion was very involved in the community, The Millan Social Club, Beresford Church and The Souris Legion Ladies Auxiliary.  She played guitar, piano and sang at local dances. While on the farm, Marion took a hairdressing course and set up shop in her home. Many friends and neighbors came to get their hair done and always had a good visit. She enjoyed spending time with her grandchildren and attended basketball, skating, baseball and hockey events. Grandma Marion was their #1 fan. Marion is survived by her sons Wayne of Brandon, Brian wife Brenda of Souris; grandson Mathew wife Melissa, great grandson Nolan and great granddaughter Natalie of Kemnay; granddaughter Jenna husband Lee Marwick of Souris. Son Donald wife Melanie; granddaughters Kalena and Jerra of Carberry. Marion is also survived by her brother Geordie (Joyce) of Saskatoon and sister Joyce Gerry of Calgary. A celebration of Marion’s life was held on October 20, 2015 at the Souris Legion. Mom, Grandma, Marion will be greatly missed.