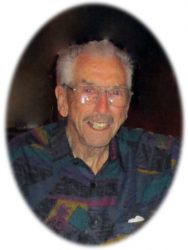 Len was born on August 25, 1923 to Thomas and Julia Haskett, the youngest of nine children.  He grew up on the family farm near Virden and went to Springvale School.  He worked on the farm until he joined the Royal Canadian Air Force in March 1942 and was stationed in Yorkshire, England.  After the war, in 1946, he started his working career with the Manitoba Power Commission.  He married Bernice Raymer in 1948.  In the years following they resided in Glenboro, MacGregor, Churchill, Grand Beach, and moved to Souris in 1966.  He retired from Manitoba Hydro in 1982.  Post-retirement years allowed Len and Bernice to spend numerous winters in Texas. Curling, making beer and maintaining the yard were his pastimes.  Len was a member of the Souris Legion and a past member of the Souris Volunteer Fire Department.

Special thanks to Dr. Cram and staff at the Souris Health Centre and Personal Care Home for their compassionate and loving care.

A Private Family Graveside Memorial Service was held on October 16, 2015 with Reverend Wendy Rankin officiating.  A Celebration of Life followed for family and friends in the Legion Clubroom.

The family sincerely appreciate the many acts of kindness, flowers, baking and those who travelled long distances to honour Len.

In memory of Len, donations may be made to a charity of your choice.