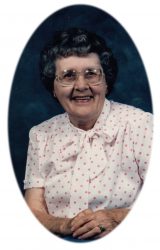 Martha passed away August 25, 2015 at the age of 99. She was born August 3, 1916. She and her twin brother were the second youngest in a family of 6 children. Her mother died very suddenly when she was about 10 years old and the family was left to struggle on with the help of the older siblings. She grew up in the Kelwood and Neepawa area. Later the family moved to the Elgin area where she met her husband, Raymond Louttit.

Mum and Dad were married in 1940 and together they farmed in the Elgin district and raised a family of 4 children. Mum never learned to drive. Having to coordinate the clutch, gear shift, brake and steer at the same time was just too overwhelming for her and after a bad experience with the gate she decided driving wasn’t for her. One of the things mum did on the farm was make quilts.  When they moved to Souris in 1979 a more active social life opened up for her. She enjoyed her neighbours, joined the seniors drop-in and in summer her and dad followed the harness racing circuit.  Mum liked to read and was always getting books from the library.

Dad did not care to venture too far from home but mum on the other hand wanted to travel and see the country. She discovered the pleasures of tour bus travel and made several trips; to each coast and even did a trip to Florida.

Mum loved to play bingo and loved to play cards. She went to Saturday night bingo every week especially when she lived on the farm, and she enjoyed playing cards at the drop-in and when family would visit, and played cribbage right up to the end with her devoted niece Audrey.

Mum had 8 grandchildren, 9 great grandchildren and 2 great great grandchildren. Some of the memories of the grandchildren are: grammas homemade cookies and buns when she lived on the farm, going to Saturday night bingo with gramma, and going to the pool, Victoria park and of course the swinging bridge.  One remembers that even though she had lived in town for years, gramma still put on her lipstick and good shoes for a trip to the store. In later years she loved to sit on her couch in the apartment and chat. She’d get out her book with all the birthdays and talk about all the news from friends and family. They were impressed how gramma had such a great memory for people and their lives.

A memorial service was held at Elgin cemetery September 8, 2015 with Rev. Harvey Hurren officiated. Donations may be made in Martha’s memory to a charity of your choice.