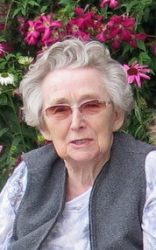 Phyllis Williams, a long-time resident of the Souris area, died August 7, 2015 with her family at her side. Phyllis was born July 2, 1928 at Minitonas, Manitoba to Archie and Bea Janz. She was the youngest of their five children. She told us stories about helping her father on their farm and of the many childhood pranks she pulled with her sisters and brother. Tragedy struck her family when her brother, Henry, was killed in a farm accident at the age of seven.

Phyllis and Ross worked their mixed farm near Menteith until their retirement in 1985. She was known for her hard work and beautiful vegetable and flower gardens. She was a skilled seamstress, using her talents to craft a diverse range of clothing from wedding dresses to uniforms. She was very active in the community teaching 4-H sewing, cooking, home design, and public speaking, being honoured with a 4-H Lifetime Achievement Award. She belonged to the Toastmistress Club, the CWL, the Whitefield-Breezelawn Guild, and the Souris Drop-In Center.

Phyllis and Ross were both staunch, life-long supporters of the NDP. They were influential in raising funds to build the Souris Arena and the Souris Community Hall. Furthermore, they were passionate about the development of education, sports and music in their children. Both graciously welcomed and shared their home with others, always making room for that extra someone at their dinner table.

Upon retirement Phyllis and Ross moved to Souris, where they spent many happy years together. After Ross’s death in 1996, Phyllis continued to support her family, church and community, residing in their Souris home until 2011, spending her remaining three years in the Souris Personal Care Home.