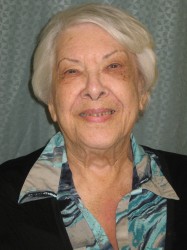 Born January 1, 1925, Kenton Manitoba. Died May 19, 2013, Souris, Manitoba.It is with great sadness we announce the passing of our dear mother, grandmother, great grandmother and friend, Emily Turner. She passed away peacefully on May 19 at the Souris Personal Care Home. She was the first child born to her loving parents Grace and Gordon Hunter in 1925 at Kenton, MB.Emily was a life-long teacher, both in and outside of the classroom and was the first teacher at the Newdale Hutterite Colony beginning in 1969.  Emily was a well known artist, a founding and long time member of the Souris Art Club. She also enjoyed her acapella and barbershop singing. Always first was her love for her children.

Emily was predeceased by her husband R. Holtby “Hope” Turner, who passed away in 2005, as well as her two brothers Clare Hunter and Kenny Hunter. She leaves behind her four children Jack (Sharon) Turner, Pinawa; Wendy Turner, Toronto, Craig (Diane) Turner, Glenwood, AB; and Brent Turner, Thailand. She will be greatly missed by her four grandchildren, Devon Turner, Sheena Turner, Josh Turner and Katie Turner, and great-grandchild, Danielle Turner, as well as her siblings Kay (Omar) Aschim and Garth (Lynda) Hunter and sisters in-law Donna Hunter and Carol Hunter.An internment was held May 24 at Rosewood Memorial Gardens Cemetery in Brandon, followed by a service at St. Paul’s United Church in Souris. In memory of Emily, donations can be made to the Souris and District Arts Council at Box 518, Souris, MB, R0K 2C0.THE SONG IS ENDED………
BUT WEREN’T WE BLESSED TO HAVE HEARD THE MUSIC !

8 thoughts on “Turner, Emily May”