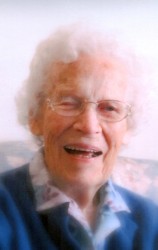 Whittingham — Elizabeth (Nee Miller) was born November 30, 1918 at Fairfax, Manitoba. Her family moved to Elgin in 1920 where Beth remained until 1999. Beth was employed by the telephone office and post office. In 1941 she married William Whittingham. Beth was active in the Anglican Church, Elgin Rebekah Lodge and the Legion Ladies Auxiliary. Beth moved to Souris in 1999 where she was able to visit with many former friends and neighbors from Elgin. Beth was predeceased by her son Roger in 1972, and her husband Bill in 1997. She is fondly remembered by numerous nieces and nephews. A funeral service was held at St. Luke’s Anglican Church in Souris on Friday, May 10, 2013 followed with a reception at the church. Beth was laid to rest in the Elgin Cemetery.