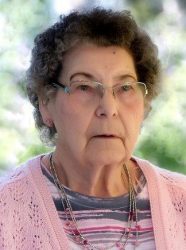 Clemence was born on September 3, 1922, the third child of 14 children. The family moved several times finally settling on a farm in the Griswold area and this is where she met her husband, Fred Willman. They were married on November 14, 1944 and they farmed in the Griswold area raising their two sons, Bob and Richard. We remember Clemence as a hard worker, milking cows, having a big garden and doing lots of canning of vegetables and fruit. Her life centered around her family as time spent with them meant everything to her. She was a very caring and loving wife, sister, aunt, mother, grandmother and great grandmother.

Fred passed away in 1972 and this is when Clemence started working as a waitress in Souris at the Souris Motor Inn and after that, Chicken Jacks. In 1976 she bought a house in Souris and moved into town, living there until 1997 when  she moved to the Souris Apartments. She was there until 2009 when she moved again into Crescent Manor. In 2012 she went to Victoria Park Lodge for a short while and in 2013 she spent the past 2 ½ months in the Souris Personal Care Home.

In memory of Clemence donations may be made to the Griswold United Church or a charity of your choice.